Two Houston ISD high schools have been ranked among the top 20 in the nation by U.S. News & World Report for 2017.

Both schools jumped in the rankings — Carnegie Vanguard moving up from the No. 10 slot last year and DeBakey High School rising from the 29th-best school in the nation in 2016.

U.S. World & News Report’s annual rankings of high schools and colleges are among the most closely followed in education.

Despite the recognition of HISD’s top two magnet schools and the district’s focus on such programs, many of the district’s other magnets fell much lower on the list. All eight of the Dallas ISD magnet schools ranked by U.S. News & World Report placed among the top 100 magnet programs in the country, while only five of Houston’s 15 ranked magnet schools made the cut. Jordan High School was ranked third-to-last at No. 290.

Still, schools ranked lower on the list were among the top-performers in the nation, earning a bronze designation and a ranking. More than 70 percent of high schools nationwide were not ranked or given a distinction.

Houston ISD’s two highest ranked schools were among four in Texas to earn slots in the nationwide top 20. The other two were located within the Dallas ISD. Houston’s suburban school districts did not have any schools represented on the state’s top 20 list. Aldine ISD’s Victory Early College High School came closest, as the 21st best in the state.

Officials with U.S. News and World Report devise the rankings by looking at whether students perform better than expected in their state, how well disadvantaged students perform compared to the state average, graduation rates and preparedness for college-level coursework. 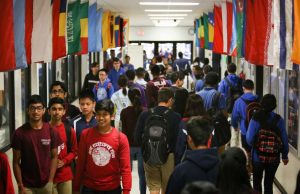 Service animals are welcome.
We seek to comply with all ADA and Fair Housing regulations.

You can find out more about which cookies we are using or switch them off in settings.

This website uses cookies so that we can provide you with the best user experience possible. Cookie information is stored in your browser and performs functions such as recognising you when you return to our website and helping our team to understand which sections of the website you find most interesting and useful.

Strictly Necessary Cookie should be enabled at all times so that we can save your preferences for cookie settings.

If you disable this cookie, we will not be able to save your preferences. This means that every time you visit this website you will need to enable or disable cookies again.